A Sturgeon conference under the Austrian EU Presidency took place in Vienna on 9 and 10 July. High-ranking experts from the European Union (EU) and neighbouring countries met in Vienna to discuss the transnational protection of sturgeon species in the Danube River. The event was organised jointly by the International Commission for the Protection of the Danube River (ICPDR) and the Austrian Federal Ministry for Sustainability and Tourism. WWF was one of the participants, as a partnering organisation to ICPDR, and among the guests from the Lower Danube Region, were official representatives from Bulgaria, Serbia and Ukraine. 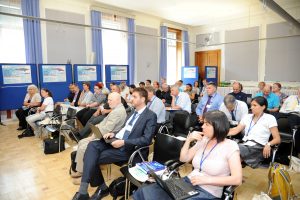 “Sturgeons have witnessed the rise and fall of European empires, yet have no concept for national borders, which their ancient migration routes cross. They are an excellent symbol for the need of international cooperation – one state cannot protect them without the efforts of its neighbours”, says Beate Striebel, WWF Network Sturgeon Strategy Coordinator.

WWF cooperates with the World Sturgeon Conservation Society (WSCS), a global network of sturgeon scientists, to establish a new Pan-European Action Plan for Sturgeons. It will be submitted under the Bern Convention (Convention on the Conservation of European Wildlife and Natural Habitats), and serve as a guiding framework for all sturgeon range states in Europe.

WWF welcomes the leading role of the Austrian presidency to enhance the conservation measures and emphasises the great urgency for their implementation. The EU has already demonstrated that sturgeon protection is a priority by financing two LIFE projects for Danube sturgeons – LIFE Sterlet, led by the Austrian University of Natural Resources and Life Sciences and LIFE for Danube Sturgeons, led by WWF, as well as several other projects for other European sturgeon species.

What needs to be done is clear:

WWF is engaged in sturgeon protection measures in most Danube countries, at the Rhine in the Netherlands, the Vistula in Poland and the Rioni in Georgia. We support the implementation of the Marine Framework Directive, Convention on International Trade in Endangered Species (CITES) or Regional River and Sea Conventions such as the ICPDR or the Mediterranean Sea Convention, as they all are highly relevant for sturgeon conservation. Formerly sturgeons were present in almost all European rivers but today seven out of the eight species of sturgeon are threatened with extinction. The main reasons are overfishing and loss of habitat through dams that block migration routes or in-river constructions, facilitating navigation. These are often detrimental to the feeding and spawning habitats, necessary for sturgeon survival. Within the EU the only river with naturally reproducing sturgeon populations remains the Danube. Crucial but no longer reproducing stocks are left in the Po in Italy and the Gironde in France. Restocking activities take place in France, Germany, Poland, Austria and the Netherlands. Only few rivers remain outside of EU, most important are some Ukrainian and Russian waters and the Rioni in Georgia.