Such unusual gathering of juvenile sturgeon is caused by a destroyed river ecosystem in the region.

During a planned monitoring expedition, part of “LIFE for Danube Sturgeons” project, the WWF Bulgaria team of experts registered 100 young Sterlet, found close to Vetren village, on the Bulgarian part of the Danube River. 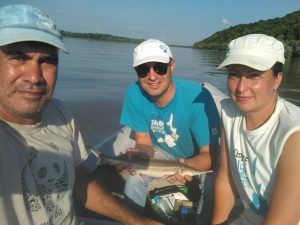 “The unusual gathering of young  Sterlet – probably hatched in the spring of this year, seems like positive news, but unfortunately it is an indicator of an imbalance in the natural river ecosystem”, says Stoyan Mihov, WWF Bulgaria expert. “The fish had been forced to move searching for new feeding grounds, as their eastern feeding habitat was destroyed earlier this year”, adds Stoyan Mihov.

In spring a dredger reportedly left its designated area and dug in an area, which has been a traditional fishing spot and a sturgeon feeding habitat. Back then, WWF Bulgaria notified the local authorities for this violation, unfortunately a day before the authorities’ arrival, the dredger left, leaving behind a seriously damaged river bottom ecosystem.

Habitat alterations like channelisation, river straightening and gravel extraction have an immediate negative impact on sturgeon spawning and feeding. 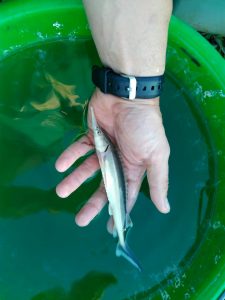 During the monitoring expedition, the WWF Bulgaria team tagged and measured the young Sterlet, took genetic samples and released the juveniles back into the river. Next step is mapping Sterlet’s feeding grounds and analysis of the newly obtained data. Unfortunately, the low number of other sturgeon species found is a serious proof for the degradation of the river ecosystem.

In 2014 and 2015 WWF Bulgaria released in the Danube river 50,000 sturgeons, as part of a project “Implementing activities in the National Sturgeon Action Plan to improve the conservation of sturgeons in Bulgaria”. This was the first restocking of an endangered fish species performed by a non-government organisation in Bulgaria.