Geneva, 17 July 2018: Twenty years after trade in sturgeons was regulated, illegal trade in sturgeon caviar continues and threatens the survival of this endangered group of species across the world, according to a new TRAFFIC and WWF study.

Published today to coincide with the meeting of the Animals Committee of the Convention on International Trade in Endangered Species of Wild Fauna and Flora (CITES), the rapid assessment – “Understanding the Global Caviar Market” – of market surveys and trade analysis found that the CITES caviar labelling system is lacking in key range and consumer countries, making it easier for illegally sourced wild caviar to be traded both domestically and internationally.

“Sturgeon populations have severely declined in the past decades: poaching and illegal trade in wild caviar is still a threat to sturgeons” said Jutta Jahrl caviar trade expert at WWF. “Our study shows that inconsistency in labelling design, placement and quality is a serious issue, making it difficult for enforcement authorities, producers or consumers to detect invalid CITES labels” said Hiromi Shiraishi, one of the study authors at TRAFFIC.

All 27 sturgeon species are listed in IUCN’s Red List, 16 are critically endangered. One of the main reasons for the alarming pace at which sturgeon populations have been declining in the wild is unsustainable fishing driven by high prices of caviar and the demand for wild sourced caviar.  The rapid assessments of online and physical markets in six key range or consumer countries (China, France, Germany, Japan, the Russian Federation and the USA) were conducted between December 2017 and February 2018. The goal of the study was to shed some light on the global market of caviar after two decades of CITES regulation of the caviar trade. 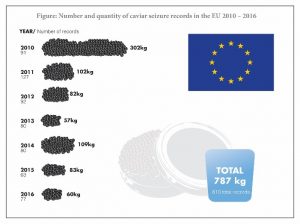 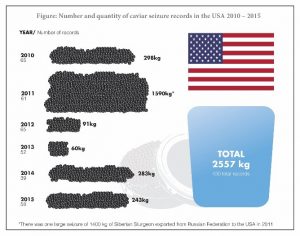 The countries examined in the study, are Parties to CITES and should implement a universal labelling system for any caviar sold internationally and domestically. However, the study found that only two (Germany and France) have implemented it in their domestic trade. The lack of implementation in key domestic markets such as the USA, China or Russia undermines the original purpose of the labelling system to ensure legal and traceable trade. And even where labels were found on caviar containers, they did not always fulfil the CITES labelling requirements. In France there were instances where the containers appeared to have no seals or packaging to show visual evidence of opening and the lot identification number was missing in one case. 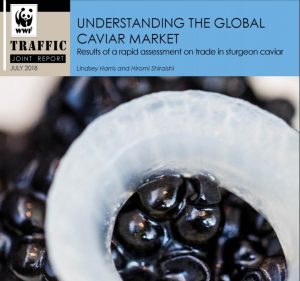 Caviar claimed as of wild origin was offered for sale in all six countries, both online and – apart from China, where no caviar was found at all – in physical markets. Consumers still ask for wild caviar, as it is regarded as superior to farmed. “The fact that in Russia, Germany and France caviar sold as wild was offered “under the counter” or on the black market, not openly, suggests dubious business”, says Jutta Jahrl, caviar trade expert in WWF. “In the previous surveys we already found both aquaculture caviar falsely sold as wild, deceiving the consumer, but also wild caviar “laundered” as farmed to legalise it. This still poses a threat to wild sturgeon populations, as poaching occurs across the globe”.

Despite the introduction of CITES regulations and the rapid growth of aquaculture production, illegal fishing of sturgeon and illegal trade in wild caviar still pose a serious threat to remaining sturgeon and paddlefish. The Caspian Sea sturgeon population has continued to decrease dramatically despite the CITES listing and anecdotal evidence of poaching was found in Russia. As European species have declined, the USA have seen more poaching pressure on American species.

There is an obvious need for sampling, DNA and isotope analysis to determine the hotspots for poaching and trade. CITES enforcement must be improved to resolve the traceability and fraud issues. Existing regulations should be implemented at the the domestic level to increase traceability of all caviar on the market, and existing caviar labelling regulations should be strengthened to facilitate controls and avoid fraud.

The full TRAFFIC report can be found at: www.traffic.org/global-caviar-market.pdf