This is the second consecutive “Sturgeon Watchers” volunteer programme in Ukraine for monitoring and conservation of sturgeon spawning sites on the Ukrainian part of the Danube Delta.

“In 2017 we had the first pilot “Sturgeon Watchers” project with students from the Odessa Ecological and Kherson Agricultural universities. This year we changed the format and involved active volunteers instead of students. We also changed the educational approach, as we first organised an online course before heading out for the mission, which gave us more time for the real field work.”, says Inna Hoch, ichthyologist and Coordinator of the “Sturgeon Watchers” programme, part of the EU funded project “LIFE for Danube Sturgeons”.

Together with experts of the Danube Biosphere Reserve (DBR), our volunteers studied the migration of sturgeon juveniles in the Danube Delta, using trawling method. During those exploratory trips the Sturgeon Watchers registered three young Sterlet (Acipenser ruthenus) and one very young, not older than three weeks, Beluga Sturgeon (Huso huso).

“Finding juvenile sturgeon is a positive fact, which indicates natural reproduction in the Lower Danube, because sturgeon restocking was not carried out this year in Ukraine or in any other of the Lower Danube region countries. Registering such young Beluga Sturgeon suggests possible spawning grounds near Isaccea (Romania), close to the Ukrainian Orlivka village, which spawning sites were recently discovered by Romanian ichthyologists. Unfortunately, the absence of other sturgeon species is a strong indicator of the critical condition of the wild sturgeon populations in the Danube river.”, says  Inna Hoch 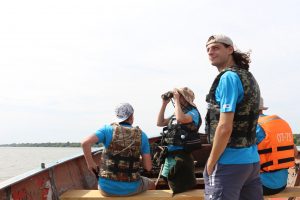 The volunteers patrolled the Danube waters together with the border guards of the Vylkove department. Patrolling around they went to check how the rotating IP camera, which was installed last year for a quick response to illegal fishing, actually operates. “During our trips, we watched fishermen pulling out floating fishing nets. And we stopped and checked every boat. The border guards ran document checks, and I must say fishermen need a lot of documents, and together we checked what kind of nets were in the boat. It is important to know the type of the nets because they are an indicator for the kind of fish the fishermen were out there to catch.”, says Ekaterina Vasilenko, a volunteer in the “Sturgeon Watchers” programme. 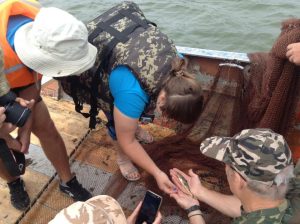 “This year’s “Sturgeon Watchers” mission was a new experience for WWF Ukraine. We relied on the right selection of motivated volunteers, on the goodwill of the local community in Vylkove and on the support of scientists and local authorities. The full analysis of the mission – lessons learned and ideas for improvement, is still to be done. For now, we are very grateful to all who took part in the 2018 “Sturgeon Watchers” project ”, says Natalia Gozak, Project Coordinator “LIFE for Danube Sturgeons”.

WWF in Ukraine thanks to all who made the “Sturgeon Watchers” mission 2018 possible: