Scientists, activists and fishermen have joined forces to save the endangered wild Sterlet in Serbia.

WWF Serbia, the United Anglers of Serbia, the Association of Commercial Fishermen of Serbia, supported by IUCN (International Union for Conservation of Nature), have signed a letter to the Ministry of Environmental Protection requesting a temporary five-year ban on fishing wild Sterlet (Acipenser ruthenus) in Serbia.
Nowadays, the area of Lower Danube is the only region in the EU still holding viable, naturally-reproducing sturgeon populations. Serbia together with Bulgaria, Romania and Ukraine share the same sturgeon stocks and Sterlet has been under strict legal protection in all other Lower Danube countries. 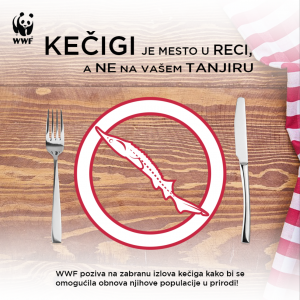 “Studies have shown that in Serbia, Sterlet is intensively fished during the seasonal spawning ban and also under the legally allowed size of 40 cm, which makes it very difficult for the wild sturgeon population to recover and to remain stable. The drastic loss of Sterlet population in Serbia indicates that the existing protection regime is not efficient for the conservation of the endangered wild Sterlets.” – says Vesna Maksimovic – “Now, having the support of fishermen associations and of international experts, we are proposing a temporary ban on catching wild Sterlet for a period of five years. Only by applying strict protection measures we can secure the recovery of stocks and survival of Sterlet in the freshwaters of the Republic of Serbia”, says Vesna Maksimovic, Project Coordinator “LIFE for Danube Sturgeons”.

According to the IUCN Red List, factors such as overfishing, habitat loss due to gravel extraction and building dams, and water pollution are major threats for the survival of wild sturgeons. WWF’s analysis shows that all those threats are present in Serbia.

Earlier this month, the public enterprise “Srbijašume” announced a two-year ban, 2018 and 2019, on commercial and recreational fishing of wild Sterlet in the fishing areas which are under their control. Moreover, the Association of Commercial Fishermen of Serbia and the United Anglers of Serbia have already requested a similar ban in the past.

WWF Serbia launched a campaign called “Sterlet should be in the river, not on your plate“, with print materials and this video spot.