Piloting a new method of sturgeon monitoring proves successful in Bulgaria, where fishermen were enabled to report on accidental catches. Between July 2018 and September 2020, WWF has received over 250 photos and videos of sturgeons, taken by fishermen at the Danube and the Black sea.

Why use fishermen for sturgeon monitoring?

Without systematic data on the state of sturgeon populations, measures for their protection risk missing the mark. For the past 8 years, WWF has been the only organization in Bulgaria, collecting such information through painstaking efforts. Community involvement is essential to species survival success and we have seen first hand how important it is for communities to actively steward the natural resources around them to improve economic and social well-being. One of the ways we do that is by involving fishermen from the communities located at the shores of the Danube river and the Black Sea  in sturgeon monitoring activities. 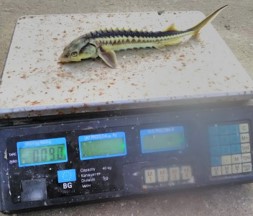 For the period of working closely with local fishermen on sturgeon monitoring (July 2018 – September 2020), a total of 253 photos and videos of sturgeon – 60 photos from the Danube and 193 from the Black Sea – were sent to WWF Bulgaria. The majority of the photos from the Black sea area were taken from October to February, while the Danube fishermen came across sturgeon species mainly in the period from April to August, including young-of-the-year fish, juvenile and adult sturgeons.

During the existing ban on sturgeon catches, data on sturgeon occurrence is collected in two main ways – through scientific research, conducted by WWF and through fishermen, reporting to us accidental bycatch. Fishermen are obliged to immediately release sturgeon caught as bycatch, but are not required to notify the relevant authorities or register these catches anywhere. To enable the monitoring activity in a way that it generates reliable and consistent data, the WWF Bulgaria’s freshwater expert Borislava Margaritova delivered a series of trainings to fishermen, and several of them were provided with mobile smartphones with camera and geolocation as part of the LIFE Programme co-funded project “LIFE for Danube Sturgeons”. In this way, fishermen are not only involved in sturgeon research, but also enhance their understanding, appreciation and ownership for sturgeon conservation. Furthermore, these fishermen were trained to assist any future activities, which should be conducted on many fish species and which the state has an obligation to monitor. 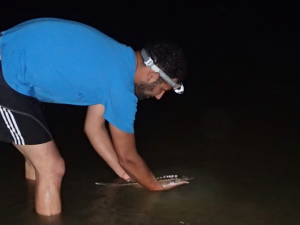 The results highlight the importance of the work of the sturgeon advocates, who have been pivotal in the “LIFE for Danube Sturgeons” project, which expanded to include the Black sea. There, our sturgeon advocate is actively collaborating with fishermen in the north areas of the Bulgarian Black Sea coast which contributed to collection of 147 photos of 46 specimens. Fishermen in the area tend to work small-scale, in shallow waters, and their sturgeon catches consist mainly of juvenile fish (young-of-the-year and juvenile fish).

Borislava Margaritova advised: “It is important that we try to maintain the established trusting relationship with the fishermen beyond the scope and the lifetime of the project work. An important factor for the collaboration in future is to continue the practice to visit these fishing communities on a regular basis, not just once or twice a year and listen to their grievances. Only then we will have the chance to observe positive and sustainable results in our attempts to reverse the accelerated disappearance of sturgeon.“

After the introduction of the much necessary ban in 2011, the Bulgariam Executive Agency for Fisheries and Aquaculture (EAFA) has no information about the state of sturgeon populations either in the Danube or in the Black Sea, as there is no data collection performed by the National Biodiversity Monitoring System (NBMS). The only data on sturgeon in Bulgaria as per November 2020 is the data obtained from the annual surveys of WWF Bulgaria on the Danube, as well as the data obtained from the smartphones distributed to fishermen.