Inna Hoch, ichthyologist and sturgeon expert in the project “LIFE for Danube Sturgeons”, joined the group of experts who will work on the new edition of the Red Book of Ukraine. According to the national legislation, the Government of Ukraine has to publish a new edition of the Red  Book at least once every 10 years. In this regard, a team of ichthyologists is actively working on the creation of a new red list of protected fish species. 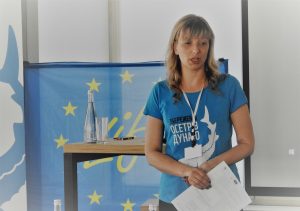 “Having in mind that the last updates in the Red Book were done nine years ago, it is clear that the existing list of protected species needs to be reviewed. The newly acquired data and findings have to be carefully analysed and afterwards, corrections in numbers, species and habitats, have to be implemented”, says Inna Hoch.

Inna Hoch joined the group of the Red Book experts, working on the status of Russian Sturgeon (Acipenser gueldenstaedtii) in Ukraine. Once, Russian Sturgeon was the most common sturgeon species in the Danube River. It regularly migrated to spawn upstream up to Bratislava. Some individuals were seen even in Vienna (the distance of migration along the river is 1925 km) and Regensburg (distance along the river – 2381 km). According to scientists, in 1966-1976, the population of Russian Sturgeon was approximately 200,000 individuals in the north-western part of the Black Sea. Today, Russian Sturgeon is included in the list of species that are under critical threat – the nature conservation status of the species in Ukraine is “vulnerable”, which does not reflect its precarious status. The size of the current population of Russian Sturgeon is unknown, but is assumed to be very low.

For the accuracy of the new edition of the Red Book, the authorities of Ukraine have to provide data from ichthyological studies on the status of the already protected fish populations, which are listed in the previous Red Book edition. “Introducing plants or animal species into the Red Book of Ukraine is the first step for restoring their number. The next steps should be effective monitoring of the populations and implementation of measures for their protection and reproduction.” – says Inna Hoch –  “Only if all these requirements are met, the Red List species, such as sturgeons, will have a real chance to survive“.