This years’ project monitoring visit – an annual initiative of the European Commission to assess progress on its LIFE projects through contracted experts – was held in Ukraine, between the 10th and 12th of October, 2017. “LIFE for Danube Sturgeons” is one of the very few LIFE projects in which organisations from non-EU countries such as Ukraine are among the beneficiaries. Conservation measures in Ukraine are crucial for the protection of Danube sturgeons, since the country’s Northern part of the Danube Delta and the Black Sea coast are key sturgeon habitats for overwintering and growth of sturgeon fish.

The Fish Agency and the market in Odessa

The tour started at the Fish Agency in Odessa, with a meeting with the officials responsible for the control of fishing at the Danube river and the Black Sea coast. They claimed to have already found the project beneficial to their work, the first positive outcome being the high-level meeting with Romanian officials that was organised in May this year upon the Ukrainian Fish Agency’s request. As a result of the meeting, the authorities committed to improve the cross-border cooperation, working towards more coherent and harmonised conservation measures in the region. The initiatives will involve synchronisation of the ban periods in the two countries, which is expected to improve the control and protection of sturgeon and other fish stocks. Nevertheless, the agency representatives believe that, unless the difficult economic situation of the Danube region’s inhabitants is addressed, poaching will be hard to stamp out. 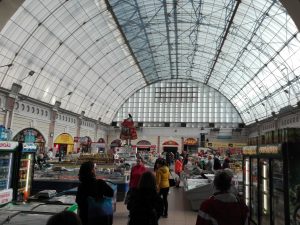 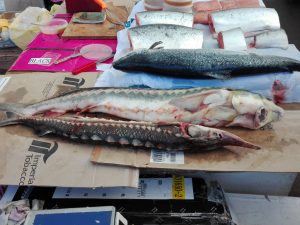 The visit of the team to Odessa’s Privoz Market was facilitated by the sturgeon expert Sergey Bushuev, and it reaffirmed the importance of enforcement agencies in ensuring legal trade of sturgeons and their products. Privoz Market is famous for the wide selection of fish products sold there, including sturgeons in different sizes and forms – fresh and dried, whole and in pieces. While some of those were probably produced legally in sturgeon farms, many were most likely caught illegally in the wild, as the species or their sizes imply.

The next site as part of the monitoring visit was Vilkovo, a small town located at the Kilia Branch of the Danube Delta, on the border with Romania. The town hosts the administration of the Ukrainian Danube Biosphere Reserve (DBR) that regulates all fishing activities and issues fishing licenses. 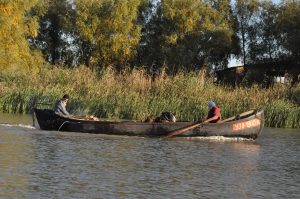 In a meeting with Alexander Voloshkevich, Head of the DBR authority, and the WWF’s local sturgeon advocate Konstantin Balatsky, various sturgeon related problems were discussed as well as possible ways to address the challenges in the region.

Fishing is a main income-generating activity in Vilkovo and roughly 600 inhabitants are registered as fishermen. Sturgeon fishing is a deeply rooted tradition in the area; for many fishermen, catching a sturgeon, especially a Beluga sturgeon, is a real stroke of luck. 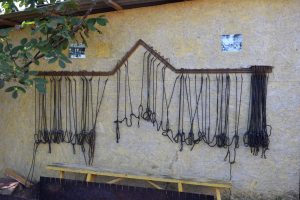 Both Voloshkevich and Balatsky agreed that the “LIFE for Danube Sturgeon” project activities must be continued in order the local fishing communities to fully understand the seriousness of sturgeon disappearance and its consequences. The conservation of those unique fish species is only one part of the problem, mainly a concern for the environmentalists. The biggest problem for the local fishing communities is that once sturgeons are gone, they will be gone forever. Fishing control is introduced to allow this valuable resource to recover and be used again in the future; a possible case scenario only if protection measures are made to work now. Among the suggested conservation measures are to introduce and implement fishing techniques in order to avoid sturgeon bycatch and to increase control and penalties that will discourage catching of sturgeons.

Several activities in that direction have already been started by the Danube Biosphere Reserve and some of the local fishing associations, kicked off by project work and events like the Sturgeon Watchers’ operation in June 2017.

Including the Border Police in the monitoring visit

was essential since it is the institution that plays a crucial role in controlling and combating sturgeon poaching. Тhe work of the local unit has been supported by the project through the provision of a surveillance camera. This remote-controlled camera is positioned on a watch tower and monitors a critical part of the Danube, where a 130-kg Beluga Sturgeon was poached not too long ago. Just a few weeks after installing the camera, the officers noticed a fisherman releasing a sturgeon that he had caught. While the camera is undoubtedly an important tool in the daily work of the Border Police, further investment in more cameras (including night vision ones) and provision of sufficient fuel for the police boats is needed to ensure close and effective supervision of the area.

The final destination of the team’s trip was the visit to the Danube Biosphere Reserve Information Centre, where they met with Tatiana Balatskaya who presented valuable and interesting facts about the natural treasures of the Danube Delta and its people. The idyllic stay at Michael Zhmud’s “Pelikan” green tourist complex in Vilkovo was a proof that eco-tourism, bird watching, and sport fishing can be excellent alternative options for local livelihoods in the heart of the Danube Delta. 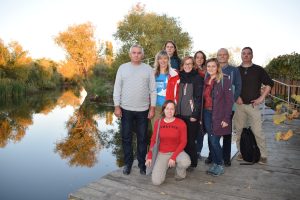 For the European Commission the main purpose of the monitoring visit is to ensure that funded projects progress as planned and to interfere in cases of major implementation difficulties; while, for the project team members this is seen as an opportunity to recapture the achievements of the past year, to reflect on the success stories and to identify areas that can be improved, often using shared experiences and practices in the LIFE network.

Jutta Jahrl, Project Manager of “LIFE for Danube Sturgeons” concluded during the last day of the trip: “The visit was eye-opening and inspirational for the entire team, as they could see the fruits of this year’s intense work of the Ukrainian colleagues and partners. We will undoubtedly benefit from the stakeholders’ already existing interest and willingness to cooperate on sturgeon conservation, because joint work is the only way to see significant changes in the region and ultimately, to save the Danube’s treasure: sturgeons.”