Illegal logging of timber continues to destroy some of Europe’s last remaining virgin forests, a considerable part protected as UNESCO World Heritage. While estimates vary across the region, satellite images and wide-ranging reports by e.g. Romanian forest district managers highlight illegal logging as one the most significant threats to sustainability.

The Carpathian forests are home to Europe’s largest remaining populations of brown bears, wolves and lynx, which despite being protected by EU and international laws and conventions, are frequently exposed to poaching.

The Danube river basin also sustains Europe’s last remaining viable populations of sturgeons. Illegally harvested caviar (sturgeon roe) reaches prices of up to 6,000 euros per kilogram on the black market – a trade worth at least 22 million euros per year to the EU. Already, one of the Danube sturgeon species has gone extinct and four are critically endangered and reported to be decreasing.

Illegal harvesting of wild birds is a little noticed wildlife crime in the region. However, 11-36 million birds are taken/killed illegally in the Mediterranean every year. In Serbia, for instance an estimated 104,000-163,000 individuals are being illegally killed/taken each year. These numbers are increasing. The birds are sold in restaurants in places like Italy and Malta.

“The looting of these natural resources undermines development and deprives governments of the money they need to promote jobs, education and health services”, said Erik Solheim, Head of UN Environment. “These resources should rather be a solid foundation for future generations”, he added.

“Europe’s last remaining old-growth forests and their biodiversity are disappearing at alarming rates”, said Marco Lambertini, Director General, World Wide Fund for Nature (WWF) International. “The Danube river, here in the heart of Europe, host the sturgeon, one of the most ancient and endangered fish species in the World. The illegal caviar trade will wipe out this species unless action is taken to prevent it.”

In order to combat wildlife crime and illegal logging, the authors of the study recommend stepping up inter-agency collaboration within countries and cooperation between the states of the region on data sharing and law enforcement. To that aim, law enforcement agencies have to be better resourced and prosecution and jurisdiction trained to increase probability of cases to be brought before court and to result in relevant penalties. The EU Action Plan against Wildlife Trafficking issued in 2016 is also in need of a strong implementation push at EU and national level. 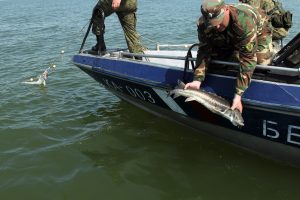 The report “Combating Wildlife and Forest Crime in the Danube-Carpathian Region” can be accessed at www.unenvironment.org

The report was prepared by the UN Environment together with WWF and Eurac Research and supported by experts from across Europe.