The World Fish Migration Day on 21 April is a one-day global celebration to create awareness on the importance of open rivers and migratory fish. Many fish need to migrate to reproduce, feed and complete their life cycle. Migratory species like sturgeons are severely threatened by man-made obstacles: dams, dikes and sluices, which disrupt the natural flow of rivers and prevent fish migration.

One of the main goals of the World Fish Migration Day is to improve public understanding of the importance of migratory fish, as an indicator for the health and ecological condition of rivers. This year, under the motto: CONNECTING FISH, RIVERS AND PEOPLE, over 1,500 organisations joined the World Fish Migration Day with more than 550 events in 63 countries around the world.

WWF Serbia met with pupils from a primary school in Prahovo (Negotin municipality), just below the Iron Gate 2 dam. The kids were involved in an educational game about the biology of sturgeons, their migration route from the Black Sea up the Danube river, and the threats to sturgeon survival, such as overfishing, obstruction of migratory routes and pollution. After the game, the WWF team screened two videos: Jeremy Wade’s “Mighty Rivers” (Animal Planet in honor of World Fish Migration Day) and “Saving the Lords of the Danube” by WWF. 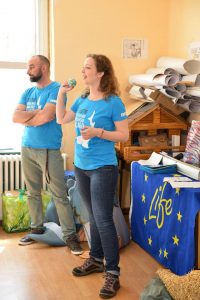 In Bulgaria, WWF together with the Sofia University’s Faculty of Biology, organised a presentation on the topic: “Sturgeons – Save the Danube’s Treasure”, on the issue of declining number of Danube sturgeons due to overexploitation and habitat loss. In the premises of the faculty, WWF exhibited an aquarium with live Sterlet (Acipenser ruthenus) and a real size inflatable sturgeon (5 m long). 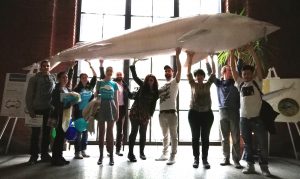 Among the visitors were scientists, students, and representatives of law enforcement authorities, as well as the general public. In addition to the activities in the university, on April 21, several schools in fishing communities along the Danube river and the Black Sea held educational classes on the life-cycle of sturgeons.

Meanwhile, in Ukraine, events for the World Fish Migration Day were organised in several places. In the Kuchmin Yar Park of Kyiv more than one hundred children aged 8 to 15 took part in an eco- quest, where they learned about the importance of healthy and free flowing rivers for migratory fish like sturgeons. And in addition, WWF experts taught the children how to make simple filters to improve water quality. 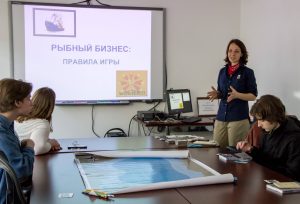 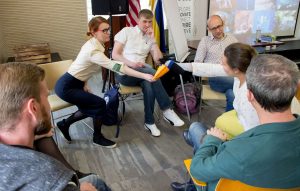 At the fest the WWF team presented to the public their volunteering programme “Sturgeon Watchers”, which will take place for a second consecutive year (more information you can find here). And the visitors were invited to take part in an interactive game called: “Fish Business”, facilitated by Natalia Gozak, LIFE for Danube Sturgeons Project Coordinator in Ukraine. In the game, teams had to manage their own fishing company, practicing responsible fishing. Players stepped into the role of captains and crew members, and competed against other fishing companies. Via the game simulation, the WWF team spoke about the uniqueness of rivers, sea and fish, and people benefiting from the natural resources without causing harm and destruction.

In Romania the World Fish Migration Day was celebrated in one of the fishing communities, where the LIFE for Danube Sturgeons project works: Jurilovca village.

The local secondary school accepted the invitation to be part of the celebration, showing great enthusiasm to learn more about migratory fish and the importance of Danube sturgeons for the river and local communities.

The team of WWF Romania used the opportunity to test their educational guide on sturgeons,

which is specially created for young people. With the help of a game, the students learned about the Danube sturgeon species, their migration route, the main threats to their survival: overfishing, loss of spawning and feeding grounds and about the measures and solutions needed for the survival of the Danube’s iconic fish. As a conclusion, the young people showed personal commitment to raise awareness among their community about the disappearing Danube sturgeons and their importance for the river.