While patrolling down the river the team helped check fish catches. Three out of ten catches included sturgeons.

WWF-Ukraine organised its third successful Sturgeon Watch mission 24 June – 6 July, this year, in the Vilkovo District (Odessa Region). Ten motivated, passionate volunteers were chosen from among 96 applicants from all over Ukraine to join the WWF team in their work to protect sturgeons. The town of Vylkove, located on the Danube River, not far from the Romanian border, is home to a fishing community with a very old sturgeon catching tradition. The city is often called the “Ukrainian Venice” because of its numerous canals running to homes and farms. 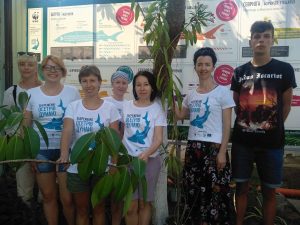 Sturgeon Watchers in Action
While patrolling down the river with Fishery Patrol inspectors, the team helped check fish catches. Three out of ten catches included sturgeons. Five adult Stellate Sturgeons (Acipenser stellatus) were freed back into the river as legally required. The high percentage of sturgeon found during this short period confirms the assumption that bycatches are still a serious threat to migrating sturgeons. The number of poaching cases also decreased during Sturgeon Watch III. The WWF team hopes one of the reasons is their extended presence in the Danube Delta (two weeks instead of one as it had been in previous years).

In addition to their patrol work, the volunteers participated in scientific fishing together with the staff of the Danube Biosphere Reserve with the hope to spot some of the 20 000 Russian sturgeons released earlier in the year at Belene (Bulgaria). Watchers also helped to organise Danube Day in Ukraine on June 29, an international annual event in which the 14 countries of the Danube Basin jointly celebrate one of Europe’s greatest river systems and the people and wildlife that rely on it.

The European sturgeon is Back: Encouraging News from the Black Sea
DNA of the European Sturgeon (Acipenser sturio), long considered extinct in the Black Sea, was recently found in many samples across the Black Sea (although few in number). According to WWF, the last time this species was found in the Black Sea (Ukrainian waters) was in the 1960’s. DNA of endangered Beluga Sturgeon (Huso huso), was also found. This gives hope for the re-establishment of their populations – provided relevant measures are taken.

The International Commission for the Protection of the Danube River’s (ICPDR) ongoing #JDS4 survey of the Danube River Basin, the Joint Black Sea Surveys have been assessing the health of the coastal waters of Georgia, Ukraine and Russia, plus Open Sea Surveys from Odessa to Batumi (in deep-water parts of the Black Sea). The findings have revealed intriguing new statistics on the marine fauna of the region, directly impacting the population of sturgeon and other fish in the Danube River basin. In order to study biological diversity, the project applied environmental DNA testing on a large geographical scale. It is a new method to detect DNA that is released from an organism into the marine environment to discover fauna living there – anything from bacteria to dolphins. This method is especially valuable for the identification of rare and endangered species (because they are few in number) and invasive species at an early stage of their invasion.

Background
Sturgeon Watch is a unique WWF-Ukraine volunteer project which has no analogues in Europe. It is part of the second LIFE-funded sturgeon project “LIFE for Danube Sturgeons,” and is aimed at involving volunteers in conjunction with law enforcement agencies to monitor the migration of young sturgeon from upstream spawning grounds to ensure unobstructed access down to the Black Sea. The original idea of Sturgeon Watchers was borrowed from the volunteer programme for the conservation of spawning sites on the Wolf River, Wisconsin, USA, and was adapted it to the Ukrainian situation in 2017.

For more information about Sturgeon Watchers and WWF’s work to save the sturgeon,