Belene, 11-12 June, 2019 – More than 20,000 baby Russian sturgeons (Acipenser gueldenstaedtii) swam away into the Danube this week, in an effort to support the natural populations of the critically endangered fish. Russian Sturgeons are one of the four remaining native Danube sturgeon species, some of the last remaining in Europe. IUCN classifies sturgeons as the most endangered group of species in the world. For many years, WWF Bulgaria has been working to protect them and their natural habitats and this is the second time we release young sturgeons in the river. In 2014 and 2015, we reared and released over 50,000 young Sterlets. The new release of the Russian sturgeons, that were once the most abundant sturgeons in the Danube, but are nowadays critically endangered, brings new hope for the species. The unprecedented event was made possible by the generous donations of WWF Austria’s supporters, who mobilized the necessary funds to purchase the baby sturgeons from the farm, which produced them in Plovdiv, Bulgaria.

All young sturgeons are with proven Danube origin and genetically tested in IZW Berlin  – this is important for their success in adapting to the natural environment and to make sure that the natural populations are not exposed to further risk by introducing non-native competitors. The baby sturgeons were reared in an aquaculture facility in conditions close to what they will face in the river.

Our experts expect that the young fish will now find a suitable place to feed and grow, before setting off on their journey to the Black sea. WWF calls on the fishermen downstream to protect the little ones, as their spiny bodies can get entangled in the fishing nets and if caught accidentally, should be released immediately back in the river. 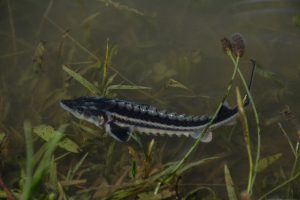 Currently, there is a complete ban of sturgeon fishing in the Danube and the Black sea. Larger fish, who swim upstream to reproduce still fall prey to poaching because of the high price their caviar and meat fetches on the black market.

Sturgeons are long lived and reproduce only a few times in their life. It will take more than a decade before our Russian sturgeons return to create a new generation. This is why they are very vulnerable to overfishing and poaching. We must make sure their habitats are protected and they are allowed to grow and thrive, or we risk losing a species which has survived over 200 million years.