WWF and the United Anglers of Serbia are warning the public again this year that, due to increased fish consumption during the holiday season, the existing problems of fish theft and overfishing of many species, even the strictly protected ones, remain unresolved in Serbia. Data obtained by WWF in cooperation with professional institutions and associations show that around 5 thousand tons of fish are legally caught in Serbia per year, while the amount of illegally caught fish is much higher – estimates go up to 10 thousand tons. Illegal fishing is destroying fish stocks, the environment and human health. 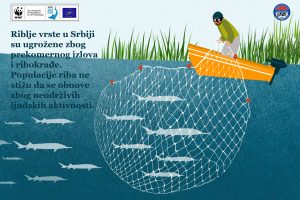 Illegal fishing, and then illegal sale of fish on the street, were made possible due to poor controls and small, practically non-existent penalties. Illegal fishing is therefore a source of easy profit without much risk. Poachers do not hesitate to sell illegal catches at fish markets, setting an example for restaurants to include protected species in their menus. The fish that is most endangered is Sterlet, for which we can say without exaggeration that is facing extinction”, said Vladimir Stakic of United Anglers of Serbia.

Poachers target primarily high-quality fish – perch, catfish and carp, and especially Sterlet. The taste and meat quality of Sterlet had triggered a chain of events that led to its mass overfishing. The implementation of the Sterlet fishing ban, which was introduced by the Ministry of Environmental Protection at the beginning of the year as a result of the WWF’s campaign, has proved to be inefficient so far, which causes this wild-caught fish to still be in regular supply at many restaurants and markets. 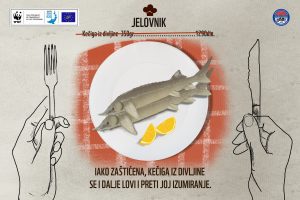 “One year after the ban’s introduction, citizens continue to send us photos through the social media channels of Sterlets served at restaurants . For us, this is a good sign because it shows that they are aware of the ban, but we are not the right place to address all these concerns – this is a responsibility of the respective inspecting institutions. The problem is that some restaurants, most notably those based near rivers, openly promote on social media how they managed to catch and serve Sterlet from the wild. The law clearly states that this is forbidden, while experts claim there is no difference in taste between a Danube-caught and farmed Sterlet. The legal alternative for everyone who enjoys eating fish, that also helps the recovery of fish stocks, is to consume fish from aquaculture. This way, the inspecting institutions as well as the activists for nature conservation would receive greater support in their work”, added Deni Porej, CEO of WWF Adria-Serbia.

WWF Adria-Serbia and United Anglers of Serbia urge the authorities not to treat nature crimes favourably, but to approach fish theft as any other theft that leaves economic loss to the country, and above all, collective harm to citizens for damaging the environment. We also strongly advise prosecution and judiciary to demand and impose adequate sentences. Illegal fishing should not be treated as a social category crime, because it is done by organized crime groups and individuals, who end up with significant illegal profit. Adequate enforcement of existing laws, strengthening of inspections and public support can contribute to solving the problem and to preserving the Serbia’s rivers and fish stock.