We are very proud to announce that our LIFE project “Joint actions to raise awareness on overexploitation of Danube sturgeons in Romania and Bulgaria”, implemented by WWF in Austria, Bulgaria and Romania from July 2012 until September 2015, has been selected as one of the Best LIFE projects.

This award is granted to LIFE projects, whose results, if widely applied, could have the most positive impact on the environment. The selection process is based on a set of “best practice” criteria, addressing the key issues of projects’ contribution to immediate and long-term environmental, economic and social improvements, their degree of innovation and transferability, their relevance to policy and their cost-effectiveness.

Our past LIFE project “Saving Danube Sturgeons” 2012 – 2015 was a major contribution to the protection of European biodiversity. It set out to stop illegal fishing and trade of the critically endangered Danube sturgeons in Bulgaria and Romania and to secure the long term survival of these species with their high natural and economic value. 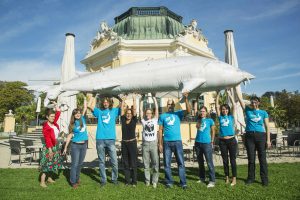 The project was the first phase of WWF’s large-scale awareness raising effort in the Lower Danube Region, targeted at fishing communities, authorities, sturgeon breeders, traders and decision makers. The outcomes of the project – valuable contacts, insights and knowledge of the problems connected with overfishing, illegal trade and shortage of law enforcement – were successfully transferred to the new LIFE project on the protection of sturgeons.

The active project “LIFE for Danube Sturgeons” 2016 – 2020 is the second phase, and the team has expanded to include conservation activities in four target countries: Romania, Bulgaria, Ukraine and Serbia – with WWF in these countries; the Romanian Danube Delta Biosphere Reserve Authority; the German Leibnitz Institute for Zoo and Wildlife Research as project partners, and WWF Austria having a coordinating role.

The winners will be announced at the LIFE Award Ceremony on Wednesday, 23 May 2018 in Brussels.