At the end of October, WWF Serbia with the support of the Ministry of Environmental Protection, held a one-day workshop: „Improving the implementation of the national laws for protection and conservation of sturgeon species“, as part of the „LIFE for Danube Sturgeons“ project.

The workshop was attended by representatives of the Ministry for Environmental Protection, Ministry of Internal Affairs, Institute for Multidisciplinary Research – University of Belgrade, Public Enterprise “Srbijašume”, Customs Bureau, Appellate Court in Niš, Public Prosecutor Office in Belgrade, Provincial Secretariat for Urban Planning and Environmental Protection, the Institute for Nature Conservation of Serbia and fish wardens. 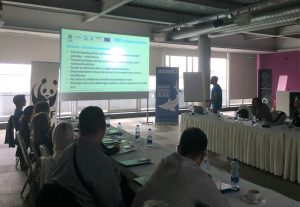 At the beginning of the workshop, WWF Serbia presented the results of the study: „Assessment of the national norms and procedures implement by law enforcement authorities for the protection and conservation of sturgeon species in Serbia”, which was conducted as part of the project activities.

Another presentation was made by Pavle Jovanović, Head of the Group for implementation of CITES (the Convention on International Trade in Endangered Species of Wild Fauna and Flora) in Serbia. Pavle Jovanović talked about CITES regulations and requirements for cross-border trade in sturgeon species and sturgeon products, such as meat and caviar. 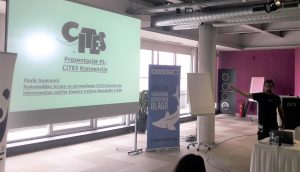 Important for the workshop was the presence of Jasmina Jović, Assistant Minister in the Ministry of Environmental Protection, who earlier this year supported the initiative of WWF Serbia for introducing a five-year ban on fishing Sterlet.

Sterlet is the only sturgeon specie of the six native Danube sturgeons that is not strictly protected in Serbia, and fishing Sterlet is allowed in certain time periods and on condition the fish is bigger than 40 cm. 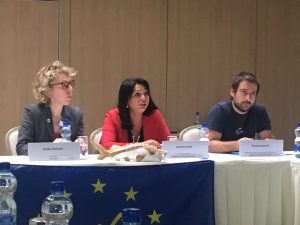 „There are no recent scientific studies on the condition of Sterlet’s population in Serbia and the Ministry allocated a budget for such research in 2019. Once we have some accurate data collected on the number of Sterlets and their age structure, we can make future plans and decide whether its status should be changed to strictly protected or it should remain protected with certain limitations in fishing“, says Jasmina Jović, Assistant Minister in the Ministry of Environmental Protection.

On behalf of WWF Serbia, Duška Dimović, Director of the organisation, pointed out that protection of sturgeons is one of the priorities of WWF on a global level, reminding that sturgeons are listed in the IUCN’s Red List, where they are categorised as critically endangered and nearly extinct.

„For us was very important that this year we had official representatives on a ministry-level from Serbia who took part in the European Sturgeon Conference in July in Vienna. The meeting was organised under the Austrian EU Presidency where high-ranking experts from the European Union and neighbouring countries met in Vienna to discuss the transnational protection of sturgeon species in the Danube River.

WWF cooperates with the World Sturgeon Conservation Society to establish a new Pan-European Action Plan for Sturgeons. It will be submitted under the Bern Convention (Convention on the Conservation of European Wildlife and Natural Habitats), and will serve as a guiding framework for all sturgeon range states in Europe. Since Serbia has ratified the Bern Convention, it will be obligatory for Serbia to implement the action plan”, says Duška Dimović, director of WWF in Serbia.