Wherever there is fishing, there is bycatch, regardless if it is fishing in a river or the sea. One of the main threats to the sturgeons, that inhabit the Lower Danube and the Black Sea waters, is that they continue to be incidentally captured along with other protected species, especially by larger vessels that fish in the sea. Furthermore, it is not a secret that modern fishing ships are equipped with often undetectable by sight fishing gear, designed to catch the desired fish species and anything else in its path. That is why as part of their work with fishing communities the sturgeon advocates on the project “LIFE for Danube Sturgeon” have been stressing on the importance of sturgeons caught by accident to be released back into the sea or the river as soon as possible.

The work with fishing communities has been particularly challenging, however, captains and fishing industry leaders demonstrate that they are well aware of the problem and are willing to take measures in order to reduce the bycatch of endangered fish species. Modifying fishing gear that allows non-target fish species to escape is often an inexpensive solution that gives sturgeons better chances to survive and their populations to recover to healthy numbers. The work on the project has shown that such initiatives come from fishers themselves and not only that, but they are actually proud to get involved in the protection of the Danube and Black Sea’s flagship species.

A very recent video from a fishing vessel from Bulgaria shows that although bycatch is still a major problem, deaths and injuries of fish can be avoided.

The collaboration between local fishermen and WWF Bulgaria is crucial for learning more about some of the most mysterious inhabitants of the Danube and the Black Sea – the sturgeons. By collecting data on sturgeon, the WWF’s experts will be able to map out potential spawning sites, migration routes and get to know more about sturgeon behaviour, which will be then used towards saving the species. The journey of the young Russian sturgeons released by WWF Bulgaria earlier in the year, in June 2019, has been of huge success so far as several fishermen from Bulgaria, Romania and Ukraine got in touch with WWF to share information on the sturgeons they had caught, measured and released back into the sea. Last week new reports came in from fishermen in Krapets and Balchik that showed photos of the already not so small Russian sturgeons proving that the fish made it into the sea and are in good health. 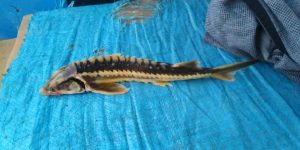 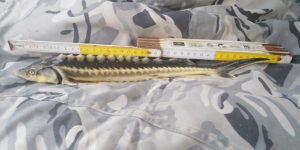 There is no doubt that without the fishermen’s efforts and good will saving the sturgeon population from complete extinction would not be possible. Working together with local communities will continue to be pivotal for this LIFE project and all field work of WWF in future.