Getting the school year off to a good start for the students in the Active Youth Clubs for the Danube and Sturgeons (TADS) in Romania meant a chance for organising many new fresh positive activities aimed at nature protection of the area along the Danube river and the Danube Delta. During the past school year, the TADS members discovered what the Green Corridor of the Lower Danube is, learned about the geographical and ichthyological specifics of the Danube Delta and focused on sturgeons and their special conservation needs.

The new school year looks far more challenging for the students and their teachers because they are due to finalise the ongoing TADS projects. The students of the local school in Sfantu Gheorghe, for example, spent more than a month on constructing their own canoe. Together with Viorel, a local canoe constructor, the children have successfully completed the work on the boat and tested it on the water.

Another exiting TADS update is the newly formed club in Mahmudia, a village located on the Danube Delta. 20 students already joined the club and they will be supported by 3 teachers. 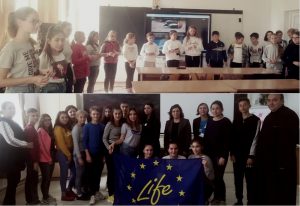 At the same time in Jurilovca, the youth club members organised games and various educational activities to celebrate the International Black Sea Action Day on 31st of October. Some of the illustrations made during the Jurilovca club’s initiative were sent over to Galati for their drawing contest on climate changes, which appeared to be of huge success and attracted lots of young artists in the area.