“…It did not seem wounded … and yet the fish had something …”

3 February 2020 – At the end of last week, a post on a social network talking about the rescue of a sturgeon spread across Romania. The sturgeon, which was reared in captivity in a lake, gave clear signs of weakness. Following the capture operation; fishermen discovered a string clew and other plastic waste blocking its throat.

“… everything went smoothly … it was caught easily, did not fight us at all, was placed on the stretcher and was quickly taken to the pontoon to study it more closely … it did not seem wounded … and yet the fish had something … had a … clew, a remnant of a raffia bag with some plastic debris and other waste just inside the mouth, stuck tightly in his mouth … a 2-3 minute operation followed and I removed something that has nothing to do with its environment … something done by the hand of man,” said fisherman Dan Constantin on his Facebook page.

The event took place in Sărulești Lake (Calarasi County), a place known for carp, catfish and sturgeon fishing. Dan Constantin says that this Beluga was about 30 years old, weighed 170 kg was 237 cm long. A real “monster,” even from the perspective of professional fishermen. “To my knowledge, such large specimens are rare even in aquaculture. The fishermen also accidentally caught some 20 kg specimens,” said Constantin.

Perhaps not by chance, the saviour fisherman is, in everyday life … an auto mechanic. He “repaired the malfunction,” but if we think about the causes, we realise that such incidents no longer fall into the “accidents” category. This is about man’s irresponsibility when he throws waste on river banks and lake shores and does not recycle, or recycles incorrectly.

“The remains of a bag! … Plastic! … We, the people! … But it cannot be said for sure that someone deliberately threw this waste into the lake. Plastic bags can come by air, actually flying from farms, or maybe brought by birds … Let’s not forget that sand bags are often used in flood prevention. These are from raffia, and over time they degrade. The debris circulating in the water can be mistaken for small fish (whitening, bream),” said Dan Constantin. 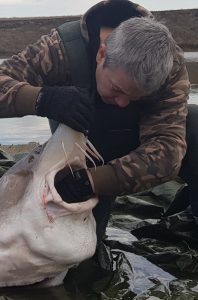 Collaborating with Fishermen is Crucial to the Danube Sturgeons’ Survival
Collaboration between local professional fishermen and WWF is crucial for learning more about the remaining wild relatives of this Beluga, as they represent some of the most mysterious inhabitants of the Danube and the Black Sea – the sturgeons. By collecting data on sturgeon, WWF experts will be able to map out potential spawning sites, migration routes and get to know more about sturgeon behaviour. Several fishermen from Bulgaria, Romania and Ukraine got in touch with WWF to share information on the sturgeons they had caught, measured and released back into the sea.

The work with fishing communities has been particularly challenging. However, captains and fishing industry leaders have demonstrated that they are well aware of the problem and are willing to take measures in order to reduce the bycatch of endangered fish species. Modifying fishing gear that allows non-target fish species to escape is often an inexpensive solution that gives sturgeons a better chances to survive, and for their populations to recover to healthy numbers. Such initiatives have often come from fishermen themselves.

”According to IUCN, no other group of species worldwide is more threatened than sturgeon, and there could be no better symbol for fighting towards zero extinction in Europe,” says Beate Striebel, Global Sturgeon Initiative Lead, WWF Central and Eastern Europe (WWF-CEE). “In the case of sturgeon, every single individual counts.”

There is no doubt that the efforts and goodwill of fishermen such as Dan Constantin is necessary to save the sturgeon population from extinction, and WWF-CEE hopes that his actions will set an example for his fishing colleagues. Working together with local communities will continue to be pivotal.