Ruse, Bulgaria, 29th June 2019 – Nearly 70 participants – residents and visitors of the city of Ruse, took part in the first Nature Triathlon “Free Danube”, organised by WWF Bulgaria, in celebration of this year’s Danube Day. The hot weather in the first days of summer did not affect the participants’ enthusiasm and they went through the different stages of the Nature Triathlon – cycling, kayaking and running, to cover altogether the distance of 70 km. The fastest among them managed to finish the picturesque, but rather challenging route in 5 hours and a half.

The emblematic WWF panda was the one to mark the start of the triathlon at 9 am, beginning with the cycling stretch of the competition from the central square of Ruse called “Svoboda” (in English Freedom). The air was charged with loads of positive vibes, good mood and adventurousness since the entire activity was aimed to promote responsive behaviour and awareness raising toward the world’s most endangered species – the sturgeons. This triathlon route has never been done before and it was sign-posted specifically for the day, guiding the cyclists through the areas “Sredna kula” and “Dolapite”, followed by the beautiful scenery of the river Rusenski Lom and the villages Basarabovo, Krasen, Bozhichen and Mechka. The participants were also given the chance to experience the local heritage sites and were diverted in direction to the rock-hewn churches of Ivanovo. 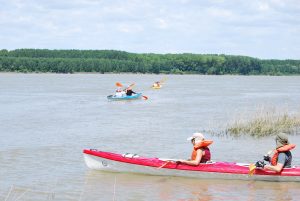 It took 45 km for the participants to go onto the second part of the triathlon where they swapped the bikes for kayaks at Stalpishte. The kayak stretch was 20 km, going back to Ruse. The ones that still had energy to spare and were curious to find out where the sturgeon journey will take them did had the last, third stage that was running in Ruse’s city parks and green areas. All finalists were cheered up at the finish line by the WWF panda and of course, by their families, friends, neighbours and the Danube Day organisers.

The event itself did not intend to have a competitive character, but it was a way to get together environmentalists, sport clubs, local fishing communities and all nature supporters in order to highlight once again the importance of protecting the Danube, its riparian forests, sturgeons and the other species living in or around the river. Sharing knowledge about the reasons that lead to sturgeon extinction remains central for the “LIFE for Danube Sturgeons” project and keeps the dialogue on how crucial it is the ban on fishing sturgeons in Bulgaria and Romania to be renewed after 2021.

„Today’s challenges that sturgeons face are dams on the river that prevent them from reaching up their spawning habitats, strengthening and chanalisation of the river, water pollution and overexploitation, which is the most damaging among all negative effects,” shared Konstantin Hristov from WWF Bulgaria. “To re-enact the sturgeons difficult situation and make it easier for the participants to understand what is happening with these ancient fish, we had a number of symbolic obstructions on the triathlon route.”

The participants’ supporters and the locals were also included in the Danube Day festivities as only a few meters from the finish line the WWF team was running a photo collage workshop in partnership with ALOS – Center for informal education and cultural activities. For kids and their curious parents the Fish Forward boat provided thematic games and videos about fishing and why it is important to be conscious of fish products consumption. WWF Bulgaria and all the offices of WWF in Central and Eastern Europe will continue with their efforts to demonstrate to people that living in harmony with nature is possible by implementing small changes every day.